In the Year 2012: Billboards and Screens

Yesterday, OC Transpo's new fare system was discussed. Today, we will look at advertising and customer information from OCTranspo's 2012 business plan.
Besides fares and government subsidies, OC Transpo generates a small fraction of its revenue from advertisements. The business plan states 1.5% of revenues, nearly $3 million annually, are from advertisements on buses, shelters and stop benches and the typical percentage for large North American transit authorities is 2%. OC Transpo plans on “using billboards on transit property to meet the needs of transit users and the general public.”
They can start with...anywhere on the Transitway. There are very few ads to be seen at transit stations, which has been puzzling since OC Transpo seems to be strapped for cash quite often and space does exist at most transit stations. Take Mackenzie King Bridge, for example. There are no ads to be seen on one of Ottawa's busiest transit stations. OC Transpo could make some significant revenue if they placed ads on the median fence facing the platform. As a passenger, I wouldn't mind more advertisements if it means not cutting service or better yet, improving service. 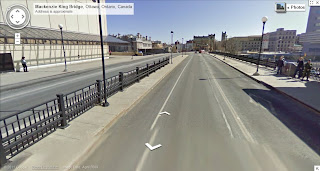 Google Street View of Mackenzie King Bridge looking east.
OC Transpo also says it will have less paper-based customer information and more electronic information this year. Besides the mobile website, there will be “next-bus arrival information delivered through fixed displays”, assuming this is real-time GPS information. When Open Data is released to the public by March 22, OC Transpo may not be in as much of a rush to provide the new displays. Still, they would benefit all customers, especially those without a smartphone, and one day, we won't have to look at those MS-DOS screens anymore.
Posted by Wes Chu at 7:00 AM

I think the OC Transpo needs to put up some billboards on the road because it's a long stretch and there's not one form of advertisement that the travelers could see. They can get the service of some reputable New York advertising agencies if they need to.